To purchase tickets please visit our EventBrite registration below:

Alliance black belt world champion Lucas Lepri is coming to Southside MMA Gold Coast. Known for his unstoppable passing skills and all round Jiu Jitsu game he has made a name for himself winning many fans around the world, including other black belt champions. His path to the top is a result of his dominating victories over todays top BJJ black belt competitors. 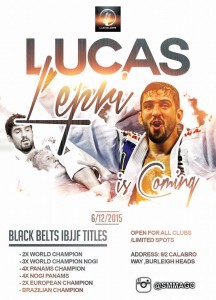 Possessing a resume which includes:

Take advantage of all the knowledge he will be sharing and demonstrating during his visit to Australia by attending the seminar at Southside MMA on the Gold Coast. Don’t miss this opportunity and make sure you stay ahead of the game.

To purchase tickets please visit our EventBrite registration below: